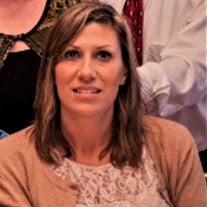 Sara L. “Beard” Graue, 42, of Carthage was tragically taken from this world in a car accident on Friday, January 4, 2019. Sara was born in Joplin on August 10, 1976 to Gilbert and Janie Beard of Oronogo. Sara was a graduate of Webb City High School and a former employee at the Cerebral Palsy Center as a developmental instructor. Sara brought the sun with her on entering a room. She loved playing sports, loved animals, but most of all loved her husband and family. In the dictionary under “real” or “genuine”, you will find her picture. Sara and Jamey lived in their own very special world and how lucky we were to be a part of it. On May 13, 1995, Sara was united in marriage to Jamey R. Graue in Joplin. Along with husband Jamey, Sara is survived by her parents and brother, Andy Beard. Sara will also be fondly remembered by her extended family, including mother-in-law Robin Graue, father and mother-in-law Reggie and Barbara Graue, sister and brother-in-law Shannon and Cory Brewer, brother and sister-in-law Reese and Rachael Graue, along with special nieces and nephews, Tiffany (Lane), Oake Roy, Atlas Lee, Ashley (Andrew), Olivia, Ivey, Quinn, Jack, Joseph, James, as well as numerous aunts, uncles, cousins, friends and her beloved animals. A visitation for Sara will be held at 10:00 a.m. Friday, January 11, 2019 at the First United Methodist Church in Carthage, followed by a memorial service at 11:00 a.m. Pastor James Lee will officiate. To celebrate Sara’s life and love of animals, donations may be made to your local animal shelter in care of Ulmer Funeral Home. Online condolences may be made at www.ulmerfh.com. Arrangements are under the direction of Ulmer Funeral Home.

The family of Sara L. Graue created this Life Tributes page to make it easy to share your memories.

Sara L. “Beard” Graue, 42, of Carthage was tragically taken from...