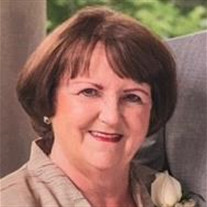 Sherry Ann “Brock” Rimer went to be with the Lord on December 4, 2017 after a short illness. She passed away at Mercy Hospital in Springfield, Missouri. She is survived by her husband Gary Stephen Rimer, daughter and son-in-law Beth and Eric Owens, son Jonathan Rimer, daughter and son in-law Sarah and Chris Hardy, as well as her beloved grandchildren: Andrew Owens, Georgia, Tessa, and Lawson Hardy, and her siblings Bruce and Kathy Brock of Springfield, Missouri. Sherry is proceeded in death by her parents Helen and Clifford A. Brock, brother Larry Brock, sister Peggy Brock and in-laws Marie and Foister Rimer. Sherry was born on June 10, 1943. She attended Hillcrest High School graduating in 1962. Sherry was actively involved throughout her school years in student government, junior high cheerleading, varsity high school cheerleading captain, journalism, homecoming attendant and queen. She was loved by all her classmates and enjoyed attending their many reunions over the years. Sherry knew at the age of six that she wanted to be a Cosmetologist. She attended Blue Bonnet Beauty School and after receiving her license was employed at Glen Isle Beauty Salon in Springfield, Missouri. She was faithful to attend High Street Baptist Church where she sang in the choir and met her husband, Gary Stephen Rimer. He said it was love at first sight. Sherry and Gary attended Bible Baptist College together where she received her degree in Education. After graduation, they accepted the call to serve and Gary pastored in St. Louis, Missouri, then later moved to Union Missouri to start a church and congregation. They eventually raised their family in Carthage, Missouri. She did not want to retire from being a beautician or leave her job that she loved, but did so after 52 years. Everyone who knew Sherry will tell you she was the most loving, giving, and kind person you would ever meet. Always putting the needs of others before her own. She had a smile that would light up a room. Her favorite hobby was knitting. Sherry would spend hours knitting sweaters, baby items, afghans, and more. She was fun-loving and light-hearted, always ready to play games with friends and family. Sherry was a devoted wife, mother, sister, and friend. Her eyes were always fixed on Jesus throughout her life. We know she is with him and singing in Heaven’s Choir. Funeral services will be held at 11:00 a.m. Saturday, December 9, 2017 at the First Baptist Church in Carthage. Visitation will be held 10:00 a.m. Saturday, December 9, 2017 prior to the service. Burial will be at Greenlawn Cemetery in Springfield. Contribution may be made to the First Baptist Church Food Pantry. Condolences may be made at www.ulmerfh.com. Arrangements are under the direction of Ulmer Funeral Home.

Sherry Ann &#8220;Brock&#8221; Rimer went to be with the Lord on December 4, 2017 after a short illness. She passed away at Mercy Hospital in Springfield, Missouri. She is survived by her husband Gary Stephen Rimer, daughter and son-in-law... View Obituary & Service Information

The family of Sherry Ann Rimer created this Life Tributes page to make it easy to share your memories.

Sherry Ann “Brock” Rimer went to be with the Lord on December...