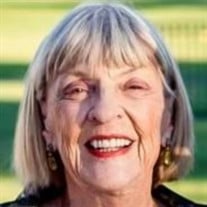 Shirley Frerer Cornell, 93, Carthage, Missouri passed away peacefully surrounded by her family at Freeman Hospital on June 14, 2022. She was a lifelong resident of Carthage. Shirley was born on May 27, 1929, in Carthage, Missouri, to the late Fred Frerer and Mabel (Suiter) Frerer. She was the youngest of her family’s five children. She loved growing up on the family farm, riding horses, and working on the farm to help her family. She was in ROTC in high school and one of her proudest moments was selling the most war bonds to support World War II and being crowned war bond queen. She was a graduate of Carthage High School, Class of 1947, and attended Sullins College in Bristol, Virginia. She married her high school sweetheart, Harry M. Cornell, Jr. in 1948 and they lived in Columbia while he attended the University of Missouri and she worked as a secretary and receptionist. After Harry's graduation in 1950, they moved to Louisville, Kentucky where he worked for Leggett & Platt, Inc. Two of their daughters were born in Louisville. In 1953, they moved to Ennis, Texas when Harry became manager of the Leggett & Platt spring plant. Their third daughter was born in Ennis. In 1959, the family moved back to their hometown of Carthage, Missouri, the headquarters for Leggett & Platt, and Harry was elected President of the company. Shirley was very outgoing and an excellent hostess when they entertained for business. She was beloved by friends, as well as Leggett & Platt employees, customers, and their spouses. In those years, she was involved in raising her children, as well as being involved in civic and social functions. She participated in a women’s investment club, played bridge, was a member of PEO, played golf and tennis, and was active in the Grace Episcopal Church. She enjoyed the outdoors and working tirelessly on her property and in her garden, owning and riding horses, was an excellent marksman, enjoyed fishing, and loved traveling. In her personal life, Shirley was a very involved and supportive mother, grandmother, and great-grandmother and she is remembered with love by each of them. She was divorced in 1977. She became a grandmother in her mid-50s, and she loved her two grandsons, Brent and Blake Beshore, unconditionally. They recall that she was always up for anything they and their friends wanted to do and she was always excited to see them. She taught them to shoot guns, play golf, cut grass, burn brush piles, unclog a dam, catch fish, and enjoy the outdoors. They knew she had their back even into their 30s and would help them in any way she could. She was encouraging and proud of her grandsons and they felt that love. From frying up freshly caught crappie from her lake to shooting off fireworks in the middle of January, she loved to be outside and create fun at Camp Nana. Her grandsons said, “She’d rather be on her tractor than seated at a nice restaurant. She loved to take care of her property, her dogs, and her family.” Friends or acquaintances often remarked that they saw her working in her yard which she did until she passed. She was artistic and enjoyed interior design and for several years, she successfully pursued painting, pottery, and stained glass. Shirley was the epitome of a kind, gracious, strong, and independent woman. She could also be characterized as a frugal, down-to-earth woman who was “a real character” and never met a stranger. Shirley was preceded in death by two children, infant Joseph Frerer Cornell, and Kathleen Diane Cornell; her ex-husband, Harry M. Cornell, Jr.; her sisters, Lucille Peters, Doris Swearingen, and Ada Fullerton, and her brother, Victor Frerer; and her niece, Vickie Diane Ummel. Shirley is survived by her two daughters, Sharon Beshore and her husband, Lance, Joplin, Missouri, and Cynthia Cornell, Corte Madera, California; two grandsons, Brent Beshore and wife, Erica, Columbia, Missouri, and Blake Beshore and wife, Teresa, Springfield, Missouri; and seven great-grandchildren, Hattie, Audrey, Blaise, Beaux, Baird, Claire, and Emma. Additional survivors include a niece, Barbara Sue Spencer, and husband, James, Eldorado Springs, Missouri., and a nephew, Ronald Kent Frerer, Carthage, Missouri. The family thanks Sue Dale Neely for her continued friendship over many years and Kelly Heidlage for her companionship over the last three years. A celebration of life will be held on Friday, June 17, at Grace Episcopal Church in Carthage, Missouri. Visitation will occur at Grace Church Parish Hall from Noon to 1 pm. A funeral service will be held in the Church at 1:15 p.m. It will be followed by a private family interment at Park Cemetery. Online condolences may be made a www.ulmerfh.com. Arrangements are under the direction of the Ulmer Funeral Home. Shirley was a major contributor to the Harry M. Cornell Arts & Entertainment Complex in Joplin, opening in late 2022. In lieu of flowers, please consider a contribution in her memory to the new Harry M. Cornell Arts & Entertainment Complex to fund building equipment needs, PO Box 264, Joplin, MO 64802.

Shirley Frerer Cornell, 93, Carthage, Missouri passed away peacefully surrounded by her family at Freeman Hospital on June 14, 2022. She was a lifelong resident of Carthage. Shirley was born on May 27, 1929, in Carthage, Missouri, to the late... View Obituary & Service Information

The family of Shirley Frerer Cornell created this Life Tributes page to make it easy to share your memories.