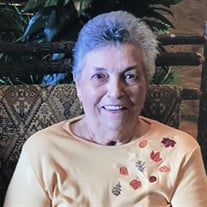 Shirley Maples, 85, passed away Thursday, January 14, 2021 at Freeman Hospital in Joplin. Shirley was born November 4, 1935 in Carthage to Albert G. and Mary E. (Kincaid) Blevins. She graduated from Carthage High School in 1954, where she was a cheerleader, and later pursued college classes in education. She resided in Washington State until 1995 when she returned to Carthage. She was employed at various public libraries, then by the National Oceanic & Atmospheric Administration for 18 years as a purchasing agent. Because her husband served 24 years in the United States Navy, they traveled extensively throughout the United States, so they took the opportunity to serve in their local communities and churches wherever they lived. Locally, Shirley volunteered at Stones Throw Theater, McCune Brooks Hospital gift shop and at the Phelps House, giving tours. She attended College Heights Christian Church in Joplin and First Christian Church in Carthage. Shirley was united in marriage to James J. Maples on June 12, 1955 at Alba Christian Church. This past June, they celebrated their 65th wedding anniversary. Shirley is survived by her husband; three daughters, Beth Ladd (David) of Arlington, WA, Rebecca Dartnall (David) of West Richland, WA, and Debbie O’Neil (Kevin) of Kennewick, WA; two sisters, Mary Jane Hicks (Frank) of Walnut, CA and Karen House (Wayne) of Knoxville, TN.; as well as seven grandchildren and 16 great grandchildren. Shirley was preceded in death by her parents; one son, Mark Jefferson Maples, on February 14, 1989 and one brother, Albert Logan Blevins, on May 7, 1996. Services will be held at 10:00 a.m. Friday, January 22, 2021 at Ulmer Funeral Home. Burial will be at Park Cemetery. Online condolences may be made at www.ulmerfh.com. Arrangements are under the direction of Ulmer Funeral Home.

Shirley Maples, 85, passed away Thursday, January 14, 2021 at Freeman Hospital in Joplin. Shirley was born November 4, 1935 in Carthage to Albert G. and Mary E. (Kincaid) Blevins. She graduated from Carthage High School in 1954, where she... View Obituary & Service Information

The family of Shirley Maples created this Life Tributes page to make it easy to share your memories.