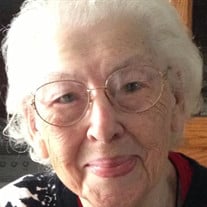 Stella Caroline Louise Obermann Quade of Carthage, MO died peacefully on July 28, 2017 at St. Luke's Nursing Care Center with family by her side. She was 96 years old. Stella was born on May 16, 1921 in Freistatt, Missouri to August and Marie (Lampe) Obermann. She married Hubert " Pete" Quade on November 18, 1945. Together they raised six children: daughters Mary (David Downs), Ruth Bozarth (Al), Naomi Cupp (Jerry), and sons John (Sherry), Dan (Ann) and Jim (Sheri). When Stella was born, her birthweight was estimated to be three pounds. Not expecting her to live, her grandmothers and namesakes Caroline and Louise baptized Stella on the day she was born and placed her in a shoebox on the warming reservoir of the wood stove. From this tentative entry into life she grew into a strong healthy woman. Stella knew her future husband Pete from early childhood, but their relationship blossomed when Stella's father was severely injured and Pete came to help with the farm chores. By happenstance, he proposed to Stella the night of the Pearl Harbor bombing. With war looming, her father requested they postpone their marriage until and if Pete returned from military service. Pete was subsequently stationed in the Pacific Theater for nearly four years. Their commitment and love was sustained throughout the separation and they remained deeply in love over the next 64 years of marriage. Life for Pete and Stella was always rewarding, but challenging for the family of eight. Above all, they loved God, family and friends and guided their children through example. Pete worked many long hours to support the family and Stella gardened and canned, sewed clothing, provided nourishing meals and expertly managed the very tight budget. She often attempted to recall specifics from those years and would have to admit the fast-paced life was simply a blur. Pete and Stella were happiest when the family was together and they adored their many grandchildren, great-grandchildren and great-great grandchildren. Stella was known for her baking . . . especially bread, cinnamon rolls and cookies. She always had a treat on hand for family or friends who came to visit. She was a talented quilter who made dozens of beautiful quilts for family members and enjoyed quilting with her special friends of Good Shepherd Lutheran Church. She loved games and was in her element playing board games with her grandchildren. In later years, she played daily Scrabble and Solitaire. She also became an avid walker late in life and was recognized by many on her daily walks around Carthage and St Luke's Care Center. Stella was preceded in death by her parents and husband, their daughter Mary, as well as brothers Elmer and Marvin Obermann. Visitation will be from 10:00 a.m. to 11:00 a.m. on Friday, August 4th at Ulmer Funeral Home in Carthage. The family will celebrate her long and loving life in a private service at Trinity Lutheran Church in her beloved Freistatt at 2:00 p.m. that afternoon. The family wishes to extend sincere thanks to the many caring people in Stella's life, including Good Shepherd Lutheran Church, St Luke's Nursing Center and Avalon Hospice.

Stella Caroline Louise Obermann Quade of Carthage, MO died peacefully on July 28, 2017 at St. Luke's Nursing Care Center with family by her side. She was 96 years old. Stella was born on May 16, 1921 in Freistatt, Missouri to August and Marie... View Obituary & Service Information

The family of Stella Louise Quade created this Life Tributes page to make it easy to share your memories.