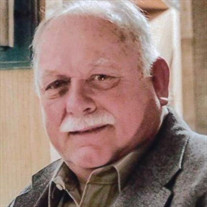 Stephen James Hunter passed from this world into his heavenly home on August, 13, 2021. He died from complications of a perforated pectin ulcer and not from the covid virus. Steve was born to Claude and Edna “Shaunce” Hunter October 17, 1947 Carterville, Missouri. He is survived by his wife Barbara Dintaman Hunter of 37 years at the home, his brother and wife Gary and Ann Hunter of Manteo, NC. Daughters and husband, Stephanie and Kelly Lattin and Stacie and Roger Carnahan and four grandchildren. He is survived by brother in laws and sister in laws and many nieces and nephews. He graduated from Carterville, Missouri High School in 1965 and lettered in all sports. After High School he started his farming career. His mother would push his stroller to a hayfield east of Carterville, Missouri to watch the farmer make hay using a sulkey rack. One day the farm asked Steve if he wanted the job operating the sulkey rake and his agriculture career took off. His next farming career was running irrigation and raising hogs on the Marvin Riley Farm at Asbury. Then Steve entered a career with bill rose pump service and water treatment in 1977. Steve received several recognitions for his outstanding sales and service in the water treatment business. He was president of the Missouri water quality association of the state of Missouri. In 1996 Steve received outstanding achievement award from jasper county soil and water district for grassland management. In 1994 to 2000 Mr. Hunter received awards from D & M Liquid and PM AG for selling liquid livestock supplement. In 1989 Steve Hunter was elected to the tri cities fire protection district which he served up until the time of his death. Under his leadership a fire barn was built near Asbury, and one just west of Alba, Missouri. He also led in the leadership a tax district to create a tax base district to house two full time employees for the tri cities fire protection barn near Alba. Steve Hunter’s most personal achievement was when he was baptized by his best friend Ron Hoyer of Olive Branch, Mississippi in Spring River Near Hardy, Arkansas. This change in his life gave him eternal life and he waits for his wife Barbara to join him on the other side of Heaven. The family requires masks be worn at the service. Memorial gifts are suggested to the Alba Christian Church, in care of Ulmer Funeral Home. A service for Stephen Hunter is scheduled for 2:00 p.m. on Thursday, August 19, 2021, at the Alba Christian Church. A visitation has been scheduled from 5:00 to 6:00 p.m. on Wednesday, August 18, 2021 at the Alba Christian Church. Contributions may be made to Alba Christian Church in care of Ulmer Funeral Home. Online condolences can be made at www.ulmerfh.com Arrangements are under the direction of Ulmer Funeral Home.

Stephen James Hunter passed from this world into his heavenly home on August, 13, 2021. He died from complications of a perforated pectin ulcer and not from the covid virus. Steve was born to Claude and Edna &#8220;Shaunce&#8221; Hunter October... View Obituary & Service Information

The family of Stephen James Hunter created this Life Tributes page to make it easy to share your memories.

Stephen James Hunter passed from this world into his heavenly...