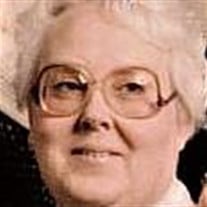 Susan Elaine (Wolfe) Mather, 67, was born on May 16, 1951 in Fairfax, Missouri, and returned to her Heavenly home on March 28, 2019 after a long illness. Her devotion to God and to her family sustained her along her difficult journey. Susan was born to John R. Wolfe and the late Olive Mae (Gregg) Hotze and was raised in Tarkio, Missouri. After high school she attended St. Joe Beauty University before opening her own shop in Tarkio. She later worked at Casey’s General Store until the family moved to Joplin in 1984. After relocating to Carthage, Susan worked at the high school snack bar. She loved to see all of the kids coming through the line and looked forward to each school year. Susan was an active member in her church, Evangel Assembly of God, and took on leadership roles for programs such as Women’s Ministry and Missionettes. She was constantly thinking up fun things they could do, and her enthusiasm and love of the work was unfailing. Susan was diagnosed with cancer in 1997 and fought the disease with everything she had. Susan’s prayers were for God’s will to be done. Although there were times she thought she was about to lose, Susan eventually won that battle and remained cancer-free until her death. Susan married Kenneth Mather and they raised two sons. She was devoted to her family, and loved to dote on her children and six grandchildren. She loved having the grandkids for slumber parties and family game night. She was always crafting, sewing, or quilting something for family or friends. She liked to scrapbook and to work on genealogy. Most of all, Susan was selfless; nearly everything she did or said or made was for someone else’s benefit. Susan was preceded in death by her mother, Olive Mae Hotze; her grandparents, Verl and Juanita Gregg; her uncle Max Gregg; her uncle Carroll Gregg; and her aunt Marge Hamilton. Susan is survived by her husband, Kenneth Mather of Carthage, MO; her son Jeremy Mather and wife Shan of Jasper, MO; her son Brian Mather and wife Leslie of Sarcoxie, MO; her grandson Benjamin Brand and wife Kendra, of Wichita, KS; grandsons Samuel and Greggory Mather, of Jasper, MO; grandson Marcus Lawson, of Carthage, MO; granddaughters Tabitha and Eden Mather, of Sarcoxie, MO; her brother Mike Wolfe of Excelsior Springs, MO; her aunt Sharon Smith of Fairfax, MO; her aunt Kay Gregg of Sedalia, MO; and numerous extended family. Services will be held 10:00 a.m. Tuesday, April 2, 2019 at Ulmer Funeral Home. Visitation will be held from 6:00 p.m. to 7:00 p.m. Monday April 1, 2019 at Ulmer Funeral Home. Burial will be at Oak Hill Cemetery in Carthage. Contributions can be made to the Evangel Assembly of God, Carthage in care of Ulmer Funeral Home. Online condolences can be made at www.ulmerfh.com. Arrangements are under the direction of Ulmer Funeral Home.

Susan Elaine (Wolfe) Mather, 67, was born on May 16, 1951 in Fairfax, Missouri, and returned to her Heavenly home on March 28, 2019 after a long illness. Her devotion to God and to her family sustained her along her difficult journey. Susan... View Obituary & Service Information

The family of Susan Elaine Mather created this Life Tributes page to make it easy to share your memories.