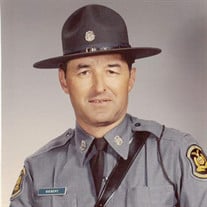 Thomas Louis Siebert was a dedicated family man, pillar of the community, and a handsome soul that you couldn’t help but love. Tom made his final steps to Heaven on January 16, 2021, surrounded by family. He was born to Edward and Audrey Siebert on November 26, 1932. He graduated from high school in Hollister, Missouri in 1951. The next year, he joined the United States Air Force and was stationed in Seoul, South Korea. He served overseas as a helicopter mechanic until the end of the Korean War. Upon his return in 1953, he was stopped as he walked off the train by a reporter who asked what he would do now that he was back home. He declared “I am going to marry Eileen Bowman of Hollister, Missouri.” And he did just that. Tommy married his sweetheart on July 31, 1954. During his time in the service, they were stationed in Montgomery, Alabama; Greenville, South Carolina; Illinois; and Texas. In 1956, Tom was honorably discharged as Staff Sergeant in the U.S. Air Force. They returned home with their new son, Michael, and Tom attended the School of the Ozarks in Branson. In 1960, he joined the Missouri State Highway Patrol as a Driver’s Examiner. Four years later, he became a member of the Highway Patrol in Troop D, stationed in Carthage. By the time he retired in 1990, he was a Sergeant serving as Zone Commander for Troop D in Carthage. During his career he served on many special assignments, including the Harry Truman Burial Detail in Kansas City, the Republican National Convention at Kansas City, and the American Legion National Convention in San Antonio, Texas. As a man who loved to work, loved to serve, and especially loved his family and friends, his retirement plans in Branson became part-time. Instead, he and his son, Mike, started Siebert’s Excavation in 1995. Tommy still found his way to Branson nearly every weekend to work on his property, but he was not quite ready to trade in his shovel for a rocking chair. During his “retirement” you could find him operating equipment, hauling rock, building houses or barns, repairing and refinishing vehicles, and attending many, if not all, of his grandchildren’s events. Tom had a heart of gold, unbelievable character, and the ability to say a thousand words with one smile and a nod. Those who loved him, and will miss him dearly, are enumerable. He is survived by his wife, Eileen Siebert of Carthage, Mo. and their son Michael Siebert and wife Janiece of Carthage, Mo. He is also survived by four grandchildren: Marcus Siebert of Joplin, Mo; Mason Siebert of Carthage, Mo; Cathryn (Kate) McNary and husband John of Golden City, Mo; and Malachi Siebert of Carthage, Mo. Tom was preceded in death by two grandsons, Michael Siebert, Jr. and Matthew Siebert. Tom is survived by his brothers, Jack Siebert and wife Judy, and Edward Siebert and wife Harriet. Tom is survived by seven great-grandchildren: Brett, Leah, Blake, Kade, Emrie, Major, and Stella Siebert, as well as one great-great grandson, Bennet Thomas Siebert. Visitation will be from 6:00 p.m. to 7:00 p.m. Wednesday, January 20, 2021 at Ulmer Funeral Home. Services will be held at First Church of the Nazarene in Carthage, Mo on Thursday, January 21, 2021. Interment to follow at Gobbler's Knob Cemetery in Hollister, Mo. At 2:30 p.m. Contributions may be made to Mercy Hospice in care of Ulmer Funeral Home. Online condolences may be made at www.ulmerfh.com. Arrangements are under the direction of Ulmer Funeral Home.

Thomas Louis Siebert was a dedicated family man, pillar of the community, and a handsome soul that you couldn&#8217;t help but love. Tom made his final steps to Heaven on January 16, 2021, surrounded by family. He was born to Edward and Audrey... View Obituary & Service Information

The family of Thomas Louis Siebert created this Life Tributes page to make it easy to share your memories.

Thomas Louis Siebert was a dedicated family man, pillar of the...