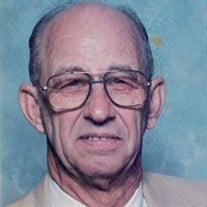 Thomas “Tom” Eugene Studyvin, 88, of Carthage, Missouri, passed away on Friday, December 17, 2021. Tom was born on May 30, 1933 in Carthage, Missouri to Archie Studyvin and Nancy “Pearl-Harp” Studyvin. He worked at Hercules Powder, making boxes, then later as a foreman at Atlas for over 30 years where he retired. Tom served his country in the United States Army for one tour during the Korean War. He was the recipient of the Korean War medal, the United Nations Service medal, the Good Conduct medal, and the National Defense Service Medal. Tom was joined in marriage to Barbara Joines on October 26, 1951 in Bentonville, Arkansas; she preceded him in death in 2016. Tom is survived by one son, Douglas Studyvin of Carthage, Missouri; two grandsons, Dr. Erick Studyvin (Cavanaugh) of Carl Junction, Missouri and Chad Studyvin (Erica) of Joplin, Missouri; one honorary grandson, Taye Witherspoon; two great-grandchildren; one sister, Nancy Warren; and many nieces and nephews. Tom is preceded in death by his wife, Barbara Studyvin; and his sister, Mary Louise Kaughman. A funeral service for Tom is scheduled for 2:00 p.m. on Thursday, December 23, 2021 at the Ulmer Funeral Home Chapel. A visitation will be held Wednesday, December 22, 2021 from 6:30 to 7:30 p.m. The burial will be at Park Cemetery in Carthage, Missouri following the service. Contributions may be made to the Alzheimer’s Association, First Baptist Church in Carthage, Missouri, or St. Luke’s Nursing Home in Carthage, Missouri in care of Ulmer Funeral Home. Condolences may be made online at www.ulmerfh.com. Arrangements are under the direction of Ulmer Funeral Home.

The family of Thomas E. Studyvin created this Life Tributes page to make it easy to share your memories.