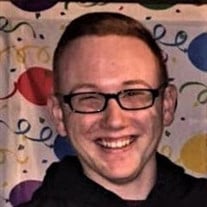 Trace Booker Stephenson, 16, passed away suddenly on Tuesday, August 7, 2018. Trace was born April 14, 2002 in Raleigh, North Carolina. The past seven years, he suffered from severe health problems, including Crohn’s Disease. Trace was welcomed into Heaven yesterday and is now walking streets of gold. No, sorry . . . he’s dancing! Trace loved to sing and dance. No doubt he’s already lined up to audition with the Heavenly Choir. Trace leaves behind his mother and step-father, Kelly and Greg Hook; one sister, Tamara; two brothers, Gabe and Tristen; grandparents, Ron and Donna Bragg, as well as many aunts, uncles and cousins. Thanks to Carthage High School for their help with his school schedule and his Show Choir Family, led by Brian Hargrave and Katie Crigger. Trace’s face always lit up when he was dancing and singing. Trace will be missed, but not forgotten. And, we have the hope and promise that because he gave his heart to Christ, we WILL see him again soon. May his memory leave a “Trace” of song in everyone’s heart! Visitation will be held from 5:00 p.m. to 6:00 p.m. Thursday, August 9, 2018 at Ulmer Funeral Home. Services will be held at 10:00 a.m. Friday, August 10, 2018 at Ulmer Funeral Home. A celebration of life will be held at 11:00 a.m. Saturday, August 11, 2018 at Crossroads Baptist Church. Contributions may be made to the Carthage High School Show Choir in care of Ulmer Funeral Home. Online condolences may be made at www.ulmerfh.com. Arrangements are under the direction of Ulmer Funeral Home.

The family of Trace Booker Stephenson created this Life Tributes page to make it easy to share your memories.