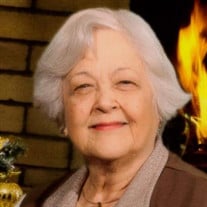 Twylla M. Jones, 81, passed away Saturday, January 20, 2018 at Kansas University Medical Center. Twylla was born October 4, 1936 in Carthage, Missouri to Hershell E. and M. Marie “Hoff” Ralston. She was a lifetime resident of the Carthage Area and served as the Deputy Collector of the Jasper County Collection Office. Twylla was also the secretary for the First Baptist Church and a member of Fairview Christian Church. Twylla was united in marriage to Darrell L. Jones on June 16, 1956 at the First United Methodist Church in Sarcoxie, Missouri; he preceded her in death March 14, 1974. Twylla is survived by one son, Jeff Jones of Carthage; two daughters, Jill Lasley of Little Rock, Arkansas and Dionis Koch of Tulsa, Oklahoma; seven grandchildren, Kimberly Kirschner, Daniel Koch, Olivia Jones, Logan Jones, Brooke Lasley, James Lasley and Joshua Lasley; and six great grandchildren. Twylla is preceded in death by her parents, her husband and one daughter, Garnet Elaine Jones in 1964. Services will be held at 10:00 a.m. Friday, January 26, 2018 at Fairview Christian Church. Visitation will be held from 6:00 p.m. to 7:00 p.m. Thursday, January 25, 2018 at Ulmer Funeral Home. Burial will be at Sarcoxie Cemetery. Contributions may be made to Fairview Christian Church care of Ulmer Funeral Home. Online condolences may be made at www.ulmerfh.com. Arrangements are under the direction of Ulmer Funeral Home.

The family of Twylla M. Jones created this Life Tributes page to make it easy to share your memories.