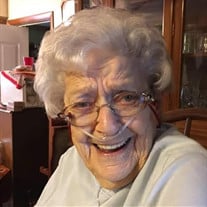 Virginia M. “Bowen” Ball, 87, passed away April 20, 2018 at the home of her daughter, Vicci West, in Oronogo, MO, where she was under hospice care for coronary heart disease, diabetes and COPD. She was a native of Carthage, born December 31, 1930 to Earnest R. and Corda V. “Harrell” Bowen. Virginia was the third of five children. She received her grammar and secondary education from the Carthage School System, graduating in 1949. Virginia was united in marriage to Floyd David Ball on May 21, 1949 in Bentonville, AR. He joined the United States Navy during World War II. They lived a nomadic life, following his various duty stations until he was discharged in 1966. The most exciting tour was the two years they lived in France, her first and last time overseas. They went there with five children and came back with seven; their eighth child was born while they were at Fort Polk, LA. They returned to Carthage, then moved to Colorado in 1970. Virginia worked as a nurse’s aide and went to Southern Colorado State College, graduating with an LPN degree in 1976. She worked ten years at St. Thomas Moore Nursing Home, then two years at the state prison in Canon City. They returned to Carthage in 1982 so she could care for her ailing mother, who passed in 1983. Virginia loved to decorate cakes for special occasions and enjoyed baking, knitting, crocheting, playing Scrabble, Phase 10 and Rummikub with her family and watching television. Her most precious gift was the time she spent with her children and grandchildren. Her advice to her progeny: “All things are possible with God. Include Him in whatever you do and you will always come out on top of the mountain you are climbing. He is always willing to help, if you put your trust in our Lord and Savior. Be patient; the answer will be worth the waiting!!” Virginia was preceded in death by her father (1941), her mother (1983), her husband (1999) and her son, Daryl Gene Ball (2006). She is also celebrating in Heaven with her three sisters, Mary Lindley Simmons (2014), Ann Oldham Winder (2011) and Nancy Jane Sparks (2009), all previously of Carthage. Virginia is survived by her brother, Bill Bowen (Marjorie) of Ft. Scott, KS; seven children, Steven Ball (Adelina) of Pensacola, FL, Sharon Pennington of Florence, CO, Terri Oakes of Carthage, Vicci West (Bob) of Oronogo, Randall Ball (Kathy) and Gregory Ball, both of Carthage, and Joni Gardner of Jacksonville, FL. She also leaves behind her beloved fourteen grandchildren, her twenty-eight great grandchildren, three great-great grandchildren, two step-grandchildren and two great grandchildren. Virginia had a zest for life; she will be sorely missed and fondly remembered by all of her family and friends. Funeral services will be held at 10:00 a.m. Tuesday, April 24, 2018 at Ulmer Funeral Home. Visitation will be held 6:00 p.m. to 7:00 p.m. Monday, April 23, 2018 at Ulmer Funeral Home. Burial will be at Webb City Cemetery. Online condolences may be made at www.ulmerfh.com. Arrangements are under the direction of Ulmer Funeral Home.

Virginia M. &#8220;Bowen&#8221; Ball, 87, passed away April 20, 2018 at the home of her daughter, Vicci West, in Oronogo, MO, where she was under hospice care for coronary heart disease, diabetes and COPD. She was a native of Carthage, born... View Obituary & Service Information

The family of Virginia M. Ball created this Life Tributes page to make it easy to share your memories.