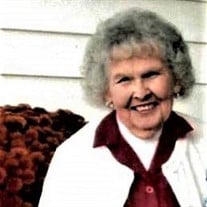 Virginia I. Castor, 86, passed away Thursday, August 22, 2019 at Mercy Hospital in Joplin. Virginia was born November 5, 1932 in Buffalo, MO to Hervey A. and Mable Ann “Smith” Wooten. She was a longtime resident of Carthage, worked at Schreiber Foods for 36 years and Wal-Mart for 9 years. Virginia was a member of Bethany Baptist Church, East of Carthage. Virginia was united in marriage to Kenneth Rex Spencer April 26, 1952 in Bentonville, AR; he preceded her in death January 8, 2004. She was then united in marriage to Roy “Gene” Castor December 1, 2012 at Risen Ranch Cowboy Church, East of Carthage; he survives. Virginia is also survived by one son, Danny Castor (Carol) of Carthage; one daughter, Rhonda Galardo (Jack) of Carterville; one sister, June Cooper of Carthage; one sister-in-law, Linda Ford of Louisburg, MO; seven grandchildren, Kalisa, Alisha, Andrea, Jamie, Joshua, Kyle and Carrie; eight great grandchildren and three great-great grandchildren. Virginia was preceded in death by three brothers, Jim Wooten, Dale Wooten and Carroll Ford; one brother-in-law, Bud Cooper (2013). Services will be held at 10:00 a.m. on Tuesday, August 27, 2019 at Ulmer Funeral Home. Visitation will be held from 6:00 p.m. to 7:00 p.m. on Monday, August 26, 2019 at Ulmer Funeral Home. Burial will be at Red Oak Cemetery, Northeast of Carthage. Memorial contributions may be made to Bethany Baptist Church in care of Ulmer Funeral Home. Online condolences may be made at www.ulmerfh.com. Arrangements are under the direction of Ulmer Funeral Home.

The family of Virginia I. Castor created this Life Tributes page to make it easy to share your memories.