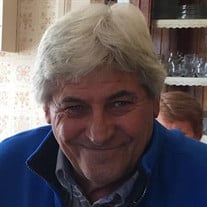 Walter Scott Campbell II, "Scotty", passed away on Monday, May 2, 2017. He was born September 18, 1950 in Carthage, Missouri. He was the son of Walter Scott and Arline (Hixon) Campbell. He graduated from Carthage High School in 1968 and Southwest Missouri State where he was a member of Kappa Alpha Fraternity. Scotty is survived by his wife Donna, three children: Melissa, Scott III (Crystal) and Erin, four grandchildren: Jordan, Scotty IV, Van and Emilia, two sisters: Judy Goff (Pat) & Trisha Coates (Gary), sister-in-law Carrie Campbell, numerous niece and nephews and great nieces and nephews, as well as two step-children: Sarah and Brad and their five children: Abby, Lauren, Anna, Rebecca and Luke. Scotty was preceded in death by his parents and brother Richard Campbell. Scotty was a Boy Scout growing up in Carthage and active in ROTC. He lived and worked in many other states, returning to Carthage to work at C&C Ford with his father. He was involved with Carthage Little League, both as a player and later as the director. Scotty was a member of and often ushered at First United Methodist Church. He took care of his mother after his father passed away. He was a one-time Carthage City Councilman. In later years, he enjoyed raising cattle on the Campbell family farmland near White Oak. Like his father, Scotty never met a stranger and many knew him, often shouting "Hey Scotty" when he walked in. He will be remembered by many for his sense of humor, brown bag Christmas gifts and Sharpie-messaged greeting cards. Memorial service will be held at 10:00 a.m., Saturday, May 6, 2017 at the First United Methodist Church in Carthage. Visitation will be from 9:00 a.m. to 10:00 a.m., prior to the funeral services. Contributions may be made to Carthage Kiwanis for Kiddieland or St. Jude’s Children’s Hospital in care of Ulmer Funeral Home. Arrangements are under the direction of Ulmer Funeral Home.

Walter Scott Campbell II, "Scotty", passed away on Monday, May 2, 2017. He was born September 18, 1950 in Carthage, Missouri. He was the son of Walter Scott and Arline (Hixon) Campbell. He graduated from Carthage High School in 1968 and Southwest... View Obituary & Service Information

The family of Walter Scott Campbell II created this Life Tributes page to make it easy to share your memories.

Walter Scott Campbell II, &quot;Scotty&quot;, passed away on Monday, May...