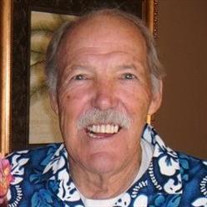 My sweetheart, Rev. Wayne G. McDaniel, 87, passed from this life to his Heavenly reward Friday, September 14, 2018. Wayne was born December 6, 1930 in Amarillo, TX to Earl and Lea Etta “Brown” McDaniel. Wayne had many loves: Hawaii, sports, the Los Angeles Lakers and Kansas City Chiefs and water skiing, but his love for God was his greatest legacy. He was a man whose big strong hands could fix anything, and he was happiest when he taught someone to waterski. He was bigger than life, never met a stranger and was always the first to lend a hand. Our love story began many years ago in Yuma, AZ. He married Stella Mae Thompson on January 8, 1950. My sweetheart and I built a life together with God at the Center. Wayne is also survived by one son, Russell McDaniel (Yvette) of Joplin; one daughter-in-law, Deanna McDaniel of Webb City; six grandchildren, Rachelle Hafer, Kary Vaughn, Jessica Taylor, Christian McDaniel, William McDaniel and Andrew McDaniel; many great grandchildren and one great-great grandchild; one sister, Redonna Cuneo; and many extended nieces and nephews. Wayne is preceded in death by one son, Randy McDaniel; one granddaughter, Katy Weathers; one brother, E.J. McDaniel; and one sister, Thelma Fornelli. Services will be held at 3:00 p.m. Tuesday, September 18, 2018 at Grace Point Assembly of God, 1605 S. Baker St. in Carthage. Visitation will be held from 6:00 p.m. to 7:00 p.m. Monday, September 17, 2018, also at Grace Point. Burial will be at Oak Hill Cemetery in Carthage. Contributions may be made to the Gideon's International in care of Ulmer Funeral Home. Online condolences may be made at www.ulmerfh.com. Arrangements are under the direction of Ulmer Funeral Home.

The family of Rev. Wayne G. McDaniel created this Life Tributes page to make it easy to share your memories.

My sweetheart, Rev. Wayne G. McDaniel, 87, passed from this life...