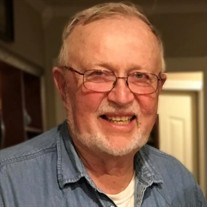 William "Bill" Wayne Strecker of Carthage, Missouri, passed away on Friday, March 18, 2022, peacefully at his home. He was born February 10, 1942 in Bazine, Kansas to Lawrence and Florence Strecker. He graduated from Bazine High School in 1960 and from Kansas State College of Pittsburg (PSU) in 1965. He was drafted to the US Army in late 1965 and served through 1967 in the Vietnam War. After returning to the states, he moved to Carthage. He served the Carthage Community for 34 years, retiring from Carthage Water and Electric in 2004. Bill was a Ford Tractor enthusiast and collector. He enjoyed tinkering in his shop, taking things apart and putting them back together. He loved his wife and family, and will be missed dearly by all. Bill married Kathryn Ruth Buxton on June 19, 1970 in Carthage, Missouri; she survives. Along with his wife, Kathy Strecker, Bill is survived by one son Jason Strecker (Carissa); one daughter Mandy Burnett (Beau); four grandchildren, Rilynn Burnett (10), Addison Strecker (9), Cason Strecker (4), Hadley Burnett (3); one brother Allen Strecker (Brenda), one sister-in-law, Dixie Strecker, and numerous nieces and nephews. Bill is preceded in death by his parents Lawrence and Florence Strecker and one brother Donald Strecker. A funeral service for Bill will be held at 10:00 AM, Thursday, March 24, 2022 in the Ulmer Funeral Home Chapel. The visitation will be held from 6:00 to 7:00 PM on Wednesday, March 23, 2022 in the Ulmer Funeral Home Chapel. The burial will be at Park Cemetery in Carthage, Missouri. Family has asked that any contributions be made out to St. Jude’s Childrens Hospital or the American Cancer Society in care of Ulmer Funeral Home. Online condolences may be made at www.ulmerfh.com. Arrangements are under the care and direction of Ulmer Funeral Home.

William "Bill" Wayne Strecker of Carthage, Missouri, passed away on Friday, March 18, 2022, peacefully at his home. He was born February 10, 1942 in Bazine, Kansas to Lawrence and Florence Strecker. He graduated from Bazine High School in 1960... View Obituary & Service Information

The family of William "Bill" Wayne Strecker created this Life Tributes page to make it easy to share your memories.