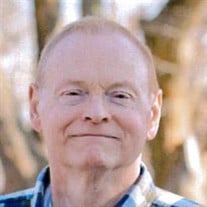 William “Ed” Jarett, 64, went peacefully to be with his Lord Friday, January 20, 2017 at his home. Ed was born August 7, 1952 in Taft, California. He was the son of Kenneth Edward Jarett and Betty Jane “Grimm” Jarett. Ed lived throughout the midwest while working for the Missouri-Pacific Railroad and various other railroads including Missouri and Northern Arkansas Railroad, from which he retired in 2012 and settled in Carthage. The highest compliment he received from fellow employees was that he was “the moral compass” of the railroad. He loved the Lord and didn’t hesitate to share his faith. He had a great sense of humor that is etched in everyone’s memory who knew him. He was loyal and loved and faithfully prayed for all of his family. He is survived by his wife and 5 children: son Kenneth Edward Jarett, his wife Lisa and their children Jayden and Reese of Garnett, Kansas, daughter Tami Farmer and husband Brian, their children Eric, Joshua, Jacob, Matthew, Kylei of Owasso, Oklahoma, daughter Chere’ Kreighbaum, and husband Eddie, their children Chris, Jesca, Randi of Carl Junction, Missouri, daughter Stefani Brock of Carthage, her children Betsy, Zack, Dylan, Emalie of Carthage, daughter Amanda Kay Schulte and husband Jered, their children Isaac and Abby of Burlington, Kansas. She is also survived by one brother Victor Jarett and wife Kim of Kansas City, Kansas and two sisters Peggy Jarett of Springfield, Missouri and Debbie Davis and her husband Bill of Springhill, Kansas and 23 great grandchildren. Services will be 2:00 p.m. Wednesday, January 25, 2017 at Carterville Christian Church. Visitation will be 6:00 to 7:00 p.m. Tuesday, January 24, 2017 at the Ulmer Funeral Home. Burial will be in Fullerton Cemetery. Contribution’s made be made to William Jarett Memorial in care of the Ulmer Funeral Home.

The family of Willliam Ed Jarett created this Life Tributes page to make it easy to share your memories.