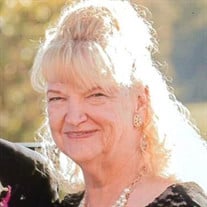 Wilma Ruth “Henry” Curry, 82, went to her Heavenly home on Tuesday, December 7, 2021 with her daughters by her side. Wilma was born on October 31, 1939 in Stotts City, Missouri to Guy Ellis Henry and Lelia Opal Dawson. She was number 7 of 11 children. She graduated from Mt. Vernon High School in 1957. She was a Telephone Operator for Southwestern Bell until September of 1960. Wilma was united in marriage to Gerald Lee Curry on November 26th, 1959 in Carthage, Missouri; he preceded her in death on December 13, 2012. Wilma was a longtime Carthage resident and moved to Webb City, Missouri in 1993 to be near her grandchildren. Wilma was a former member at the Bible Baptist Church in Carthage, Missouri and was a current member of the Prairie Flower Bible Church in Webb City, Missouri. She loved teaching children about Jesus. She taught primary and beginner classes at Sunday school for a total of 38 years. She faithfully helped with the AWANA program on Wednesday nights, worked in the church nursery when needed and always taught in Bible school during the summer. Wilma enjoyed playing the piano. She was blessed with the amazing gift of playing the piano by ear. She used this God given talent as a ministry to play for her church. She played during services, for the choir, church programs, special music and would even play for the members at her PTA meetings at her children’s school. She also volunteered her time and played for the residents at St. Luke’s Nursing Center and for a local preschool during their music class. She liked to use her God given talents whenever and wherever she could. Wilma also enjoyed volunteering her time at her daughters' schools. She was a room mother and helped during class parties. She was president of the PTA and helped organize school carnivals and events. Wilma was the kindest person on this planet and would light up the room with her beautiful smile. She was dearly loved by her family and whoever she came in contact with. She is survived by two loving daughters, Guyla and husband, Wes Brown of Webb City, Missouri and Denise and husband, Wayne Stirewalt of Webb City, Missouri; four sisters, twins, Joyce Conner of Webb City, Missouri and Loyce Foust of Belton, Missouri, Grace Ann Wood of Carthage, Missouri, and Norma Henry of Eureka, Missouri; two sister-in-law’s, Mary Ellen Henry of St. Louis, Missouri and Martha Curry of Carthage, Missouri; three brothers, Joe Rex Henry, Pastor Tom Henry and wife, Jeannie, John Henry and wife, Sharon, all from the St. Louis, Missouri area; 7 grandchildren, Zac Anderson and wife, Kailie, Brooke and husband, Seth Erwin, Trey Poulson, Corey Stirewalt and wife, Kelsey, Staci Hall, Austin Brown and Addie Brown; and 5 great-grandchildren Tucker and Boe Erwin, Stella and Sloan Anderson and Lydia Hall. Along with her husband Gerald, Wilma is also preceded in death by her parents Guy and Lelia Henry, two brothers Dick Henry and Bob Henry; and one sister Patsy Ellen Byler. Funeral Services will be held 2:00 p.m., Monday, December 27, 2021 at Ulmer Funeral Home in Carthage, Missouri. Visitation will be held from 1:00 p.m. until service time on Monday, December 27, 2021 at Ulmer Funeral Home. Burial will be at Park Cemetery in Carthage, Missouri. Military Honors will be presented in honor of her husband, Gerald Lee Curry. Contributions may be made to Friedreich’s Ataxia Research Alliance (FARA) at https://give.curefa.org/campaign/gift-of-research-2021/c374434. This is a way Wilma can honor her great-nephews, Tommy and Christian Henry, in hopes of a cure for this rare disease. Online condolences may be made at [email protected]" title="Click to open in a new window or tab" target="_blank" rel="nofollow noopener">[email protected]

The family of Wilma Ruth "Henry" Curry created this Life Tributes page to make it easy to share your memories.