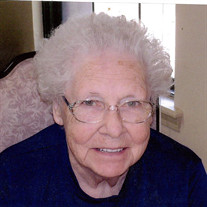 Wuanita Eugene (Lee) Zimmerman, age 86 of Carthage Missouri was received by our Lord on April 28, 2019 at 6:30 a.m. She resided at Carthage Health and Rehabilitation for her last 10 years where she was being assisted for her Alzheimer condition. She was born to Paul A. Lee and Mable R. Briden on September 17, 1932 in Overland Park Kansas. Wuanita was the 6th of 9 children. She attended Marrion County School, Carthage High school and Beautician school. Wuanita was united in marriage to Harry P. Zimmerman on December 17, 1949 in Pecular, Missouri. They celebrated 57 years of marriage, until his passing in 2007. Living in Carthage most of their adult lives. Wuanita was a devoted wife and mother. Raising three children and working outside her home in various jobs of manufacturing, food service, and the beautician field. From 1976 until 1992 she owned and operated The Corner Beauty Shop. Wuanita’s family were prime examples of her beautician’s skills. They were fortunate to receive free haircuts and perms. Taking care of her family and making them look good was an important part of her life. Caring for her children was an enjoyed part of her life. In her spare time she enjoyed sewing and crocheting. Later in life she and Harry made quilts. She always had a cup of coffee and something to eat for anyone that came to visit. Wuanita is survived by one son, William E. Zimmerman and his wife Susan of Oronogo. One daughter, Mabel R. Hutchins and Husband Loren of Carthage. One Son-in-Law, Walter D. Pruiett of Carthage. One brother, Bob E. Lee and wife Ethel of Jasper. And one sister, Lulla B. Hemby of Carthage. She was blessed with fourteen grandchildren, thirty three great grandchildren, nine great great grandchildren, and many nieces and nephews. Wuanita was preceded in death by her husband Harry, her daughter Lulla Pruiett in 2014. Step- daughter Sandra Miller. Four brothers; Matt A. Lee, Paul C. Lee, Joe B. Lee and George E. Lee. Two sisters, Evelyn R. Zimmerman and Patty L. Hunter. Our Lord has given and has taken away. We can rejoice in Wuanita’s final journey to peace. Our goal should be to join her in the Angel Choir. Services will be held 10:00 a.m. Thursday May 2, 2019 at Ulmer Funeral Home.Visitation will be held from 5:00 p.m. to 6:00p.m. Wednesday May 1, 2019 at Ulmer Funeral Home. Burial to follow the service at Fullerton Cemetery. Contributions can be made to the Alzheimer’s association in care of Ulmer Funeral Home. Online condolences can be made at www.ulmerfh.com. Arrangements are under the direction of Ulmer Funeral Home.

Wuanita Eugene (Lee) Zimmerman, age 86 of Carthage Missouri was received by our Lord on April 28, 2019 at 6:30 a.m. She resided at Carthage Health and Rehabilitation for her last 10 years where she was being assisted for her Alzheimer condition.... View Obituary & Service Information

The family of Wuanita Eugene Lee Zimmerman created this Life Tributes page to make it easy to share your memories.